"Quality Where It Matters Most"

AllCare Medical Consulting Inc. is uniquely able to assist Veterans by providing guidance with programs that can provide help in the home.

Designed to assist honorably discharged veterans that have served on the warfront, the Aid and Attendance Program provides funding for low income veterans and/or their spouses to have professional caregiving assistance with activities of daily living.  Qualified veterans can receive up to $24,228 in annual pension. AllCare Medical Consulting Inc. can assist with the qualification and funding for this program.  Contact your local AllCare office for additional information and to start the qualification process. 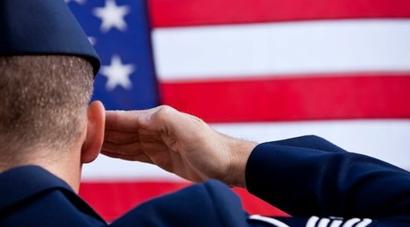 Veterans must have served at least one day during a period of war, at least 90 days in total and they were other than dishonorably discharged.  It doesn’t matter if veterans were stationed in Knoxville, Tennessee with the U.S. Coast Guard and never set foot on a boat. Veterans did NOT have to go overseas, enter combat or be wounded in order to receive this benefit.

Vietnam era – February 28, 1961, through May 7, 1975
These date ranges only consider if the veteran served in the Republic of Vietnam during that period. In all other circumstances, the period beginning on August 5, 1964, and ending on May 7, 1975.

Persian Gulf War – August 2, 1990, through Present
The date to be prescribed by Presidential proclamation or law but hasn’t been declared yet.

1 Year Prior to Death
She must have been married to the veteran for at least one year prior to his death. The reason they had to implement that is that in the early ’60s, there were a lot of nurses in nursing homes marrying the dying World War I veterans to get their benefits.

Not Remarried
The third requirement is that spouses cannot have remarried. Now, that requirement did not go into existence until November 1 of 1990 and it can be very tricky if somebody has multiple marriages. And we would never want you guys to be in the position of telling them “no” and having it incorrect.

If you have a spouse where their remarriage is confusing or even slightly raises your eyebrows, seek proper advice!

Is somebody doing a standby assist with the shower? Does somebody have to help the veteran with mobility? Does anybody have to actively administer medication? That’s when veterans are really at the level of needing the aid and attendance of another person.

If you have somebody with dementia and they’re unsafe at home alone and so one of your caregivers is there for a couple of hours providing cuing and redirection, we’re at the aid and attendance level.

Income + Asset
The financial criteria for the VA is a two-pronged financial test. Income and Asset.

For VA purposes Income = Income MINUS Regularly Occurring, Unreimbursed Medical. This is absolutely crucial because it’s a math test and it’s up to you to help veterans remember to do the math. The VA is not going to do it for them.

If veterans don’t do the math, their income might be high enough to not qualify for the award when they should because of high medical expenses!

It’s important to note that prescriptions are not included in the Regularly Occurring Unreimbursed Medical definition. The VA views prescriptions as something that could change, so it’s not regularly occurring.

What To Do For Veteran Or Spouse in Partial Situation

Here is an example to show how non-regular expenses can apply to the benefit amount:

The VA is technically giving her $1,130 a month but keeping what she doesn’t qualify for because of her financial situation. That extra $1,000 a month is just sitting for her over at the VA.

To recover some of the withheld award, this spouse could submit some of her non-regular medical expenses such as prescriptions and hearing aids. Anyone can submit these types of expenses to the VA as unreimbursed medical expenses and the VA will reimburse them dollar for dollar until they’ve eaten up the whole $12,000 that they left on the table. So not getting the full award is not the end of the world that some people would lead you to believe.

Asset
Veterans or Spouses with a large amount of assets can be disqualified for the award. But there is NO $80,000 limit. People with over $80,000 in assets have received the award because the decision is made relative to their situation.

Age, illness, income (remember to subtract the medical expenses) are all considered.

What is an asset?
Just like income, the VA thinks of assets a little bit differently. Countable assets are everything except for one house, one car and personal possessions. There is no limit on the worth of the those assets either. Don’t forget this!

Now, people get in a lot of trouble because they think, “Oh, my home doesn’t count,” and then they sell it. And what do they get for that? They get cash. And what counts? Cash.

So veterans’ homes do not count unless they sell it or rent it. If they sell it, well, now they have some cash and that counts. If they rent it, it’s an investment property and investment properties count. So it’s very important that veterans know if they’ve got the benefit and sell the house, their situation changes and they will have to contact the VA to handle it appropriately.

Aid & Attendance Misconceptions
Non-Medicaid Spouse
When a veteran or spouse is in the nursing home on Medicaid, the non-Medicaid spouse, the person living at home can still get the full benefit.

A veteran living at home whose wife is receiving home care can still get $1,380, meaning the veteran is fine. Maybe he’s out golfing while your staff is there taking care of his wife. He can still qualify. People often think, “Oh, it has to be the veteran who needs care in a married couple.” That’s not true.

Reapplication Process
Another common myth, if denied, is that veterans have to wait a year to try to reapply. That’s not true.

And a lot of folks race out and do an appeal when they get a denial letter. That is the longest way to go in the last avenue of resort that they would want to take, because the average time for an appeal to be settled is over 600 days.

If a veteran or spouse gets an appeal or denial, the first thing to do is read through it and say, “Is there any way that we can do what’s called a ‘reconsideration’ by providing additional support or evidence to the VA?”

As home care agencies, we should look for ways to avoid an appeal and also look for aspects of the application process that might have been overlooked such as how to calculate income or war period dates.

What are the general rules regarding divorce?
If a spouse were divorced from the veteran at the time of his death, they are not that veteran’s surviving spouse and cannot get the benefit. However, if the spouse were married to a veteran and he died while you were married to him, that’s the only way to pass that qualification.

But what if she were married to him at any time after November 1, 1990?

Her first husband died in the ’70s, she married somebody else in the ’80s and divorced them on October 31, 1990. All she needed was to have started the proceedings, it doesn’t have to be final, then she can get the benefit. If she didn’t start divorcing him until November 2, she is out of luck.

Is it possible to know how much the veteran or spouse will receive before they submit the application?

Based on their income level for VA purposes, you can gauge how much they will receive.

For veterans and spouses with positive income, the award will be the difference between the max amount and their income.

If you have received a letter saying that the veteran has been approved, but then no check follows for over a month, how do you get the VA to pay up?

VA pays everything one month in arrears. So if it says September 1, you’re not really supposed to get a payment until the first week of October.

So the first thing you want to do is wait until the first week of the month after the VA says they’re going to start paying you. So September 1? You’ve got to wait and give them at least until October 5.

Then the other reason that benefits are likely not being deposited is because you have changed bank accounts and closed the bank account where the money was supposed to be deposited. So when that happened, instead of writing you a letter saying, “Golly day, your bank account isn’t working,” they just sit there on the money waiting for you.

In order to get to the top, qualifying veterans and spouses have to “step” on each one individually before they can get to the top.

The benefit comes in as cash so it can be spent on home care, assisted living, home health, other out of pocket medical expenses but it can also be spent on cigarettes and groceries. It does not have to be spent on any specific thing. The deal with the VA benefit is in order to get the benefit, they must spend part of their income on medical expenses.

Qualifications of the Aid and Attendance Benefit

There are four qualifications to receive the benefit. To make sense of the complicated process, you can picture the qualifications as a set of stairs.

What is the Aid and Attendance Benefit?

The Aid and Attendance Benefit, also known as the Pension Benefit or Veteran’s Benefit, is a tax-free monthly pension to assist wartime veterans and their surviving spouses who require the assistance of another person with aspects of daily living and who meet certain financial criteria.
The maximum award adjusts every year due to inflation. This award does go up with Social Security. For 2015, here are the current amounts: 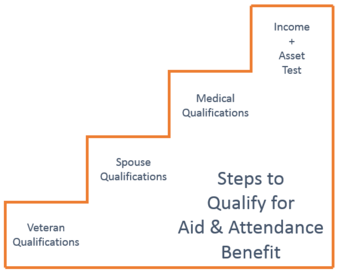